Sharing Our Passion from One Generation to the Next

Since 1965, Bickel’s has an outstanding tradition of being committed to offering quality products and reliable, friendly service. As a second-generation family business, with 57-years of experience, Bickel's is a forward-looking cycling and fitness shop with an old fashioned idea that value, service, and dependability makes doing business easy and enjoyable. As you look to bring healthy activity and fun into your life and business, we are happy to offer you the tools, expertise, and inspiration to get out and do it. Enjoy the ride!

Leroy and Sandie Bickel (founders of Bickel's, Inc.) learned early on in life that if they needed anything, they either had to make it or fix it. They also knew that their best work would be done if they did something that made them happy.

In 1965, Leroy and Sandie purchased George’s Repair Shop, which was mostly devoted to selling and fixing lawnmowers. Shortly thereafter, Leroy moved the business to Roosevelt Avenue (Burlington, IA), merging that into the full-time operation of the local Texaco station. Leroy (who had done auto repair work for Jerry Hunt’s DX station on South Hill in Burlington) grew his business to that part of town, too, and managed both locations for the next three years. During this time, he also drove a school bus to continue providing for his family. At the time (even while George’s Repair Shop had some of the first electrical testing equipment for cars in the area), running a gas station and a lawnmower repair shop was difficult in lieu of the 1970’s energy crisis. It was then, Leroy and Sandie found themselves (and their business) at a crossroads, so they went searching for something new.

Taking a cue from Benjamin Franklin’s approach to long-term planning, Leroy created a journal. Each day over the course of six weeks, he wrote down three ideas of what he could and would like to do; what were opportunities that stood a chance at success and offered a living. At one point, bicycles made the list and as the ideas were crossed off and narrowed down, bicycles remained.

Through the Years at Bickel's Cycling & Fitness

In 1972, Leroy and Sandie Bickel opted out of the service station business and moved their lawnmower and budding bicycle business into a quiet neighborhood on Kirkwood Street (Burlington, IA). It was then that Bickel’s Bicycle and Lawnmower Shop opened. With an initial inventory of thirty imported cruiser-style bicycles, Bickel’s hit the ground rolling. Within three years, Bickel’s became a dealer of Schwinn bicycles, a company that dominated the U.S. bicycle market.

In 1986, Bickel’s moved to its current location at 305 East Agency Road in West Burlington, IA. As the commercial business in the area grew, business continued to do the same. In 1991, Bickel’s became a bicycle dealer with Trek Bicycle Corporation, a Wisconsin-based manufacturer with cutting-edge steel frame technology that eventually would transpire into revolutionary OCLV carbon bikes, the very kind American cyclist Lance Armstrong would ride in the Tour de France.

In the late 1990s, Leroy and Sandie made the decision to sell the chainsaw and lawnmower division of Bickel's. This restructuring allowed them continued focus on the bicycle market while pursuing a new venture into the residential fitness market. Having already sold the Schwinn Airdyne, the strategic business move made sense. The subsequent success of that investment then transpired into a new fitness showroom addition in 2003. Since then, Bickel’s has expanded to include not only home exercise equipment but also commercial fitness, supporting area medical facilities, community wellness centers, and schools.

In 2009, after 44+ years of hard-work and dedication, Leroy and Sandie sold Bickel’s Cycling and Fitness to their youngest son Tyler and daughter-in-law Melinda. Of the thousands of bicycles sold, the generations of customers served, and his trademark radio ads chanting, “Bicycles, Bicycles, Bicycles! Gears that Shift, Brakes that Stop!,” Leroy and Sandie’s commitment to their craft, charitably, and staunch advocacy for healthy living has touched thousands in the tri-state area and across the country.

For Tyler and Melinda Bickel, the torch has been passed onto a new generation of family. Childhood friends, husband and wife, parents, and devoted business partners, they look forward to the opportunity that each day brings in this new era; serving neighbors, friends and community with the products and services that Bickel's has been known for and trusted in for over 57-years and counting. 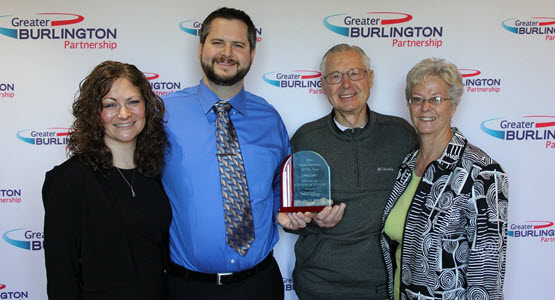 2016 Small Business of the Year

In May 2016, Bickel's Cycling & Fitness was awarded the 2016 Small Business of the Year award by the Greater Burlington Partnership.